The departure day did come, and we had to go back home from Nepal. After 6 week of travel, just me and my kids, time to get back to the real life. Crammed into a bumping car, headed in the direction of Kathmandu Airport. All luggage, and ourselves carrying white silk scarfs for goodbye from the people who in a couple of weeks have becomen so good friends. The most important scarf, tied tightly around my neck.

First, thunder and heavy rain in Kathmandu Airport. Almost all other planes got cancelled. Ours to Delhi was circling above the airports for 3 hours … almost cancelled, but in the last minute there was a clearance in the sky and they could land. I was looking at the dirty, weeping sky and agreeing – I felt the same. The kids were busy reading Tinkles in the dull emergency lightning (of course, there was a power outage). One of the fellow passengers, a man clad in white, asked if it was my prayers that kept the planes away? I don’t know – did I look this way? Definitely, head had to go home, kids had to go home, but my heart wanted to stay.

Great entusiasm when the plane finally landed. After hours of waiting, hectic activity, people lining up in the rain, ready to board the plane. And so we got to Delhi with 4 hours delay.

In Delhi, we didn’t have a multiple entry Indian visa, which meant we were transit passangers – a lesser caste, not allowed to roam freely around the airport. We had a choice of sitting on the floor BEFORE the security gate (and before chairs, waiting lounge and so on), or go upstairs and pay for a stay in one of the business longues. We tailed some loud and unhappy french customers, who talked themselves into a free lounge stay. A couple of hours later, it was discovered that we were not part of the french party, but the nice staff agreed to give us a highly discounted price and letting us stay in the coach, where the kids were allready asleep. Next morning, I was found by the friendly staff from British Airways. We were not allowed to leave the designated area, so the staff had to find us, give us boarding passes, etc. Our plane from Heathrow to Copenhagen was cancelled, we were rebooked into a later flight. They brought us the new boarding passes, and they showed me the luggage, all 3 backpacks, and tagged them with new labels. We could without any more emotions board the Delhi–London plane, and 2 movies later we arrived in London.

We were just sooo tired … and looking into 7 hours of waiting … security, security and even more security, and we could enter the brand new Terminal 5 – the reason of our trouble. The staff from BA gave us a food coupon for 5 British Pounds as a compensation for the 7 hour wait … we went to an airport restaurant, and spent the coupon and some of my euros on the first european meal in long time … somehow the hours went by, and we found ourselves sitting below the big departure board, looking for the plane to copenhagen. Which gate? No gate yet, the plane is delayed. The kids sat for an hour, just looking at the board. I dozed of and on into sleep. Finally, the plane arrived, the gate was announced. With the rest of the stranded danes, we went to the correct gate.

In the last light of the day, we boarded the plane. Flying trough the dark sky, 2 hour passes, we all doze of into sleep.

Standing at the luggage carroussel in Copenhagen. Looking for our bags. One is there. Second is there. But, hey wait, where is the big one, with all our mountain gear and souvenirs? Missing. Terminal 5 in Heathrow is the main suspect. We fill in the missing entry form, and can leave copenhagen airport as some of the very last passengers.

My husband has been waiting in the airport for hours. The flowers he had brought were lacking water. We were so tired, no chit chat, just straight to the car, for the last 2 hour drive home. Kids fell quickly asleep on the backseat – I struggled to keep my eyes open. We crossed the long bridge to our island, and finally arrived at our house. Stumbling inside, half asleep, half awayke, we could take of the white silk scarfes, some have become torn and shattered, and hang them on a honorary place in our house.

And finally, go to bed, and sleep of this strange journey. 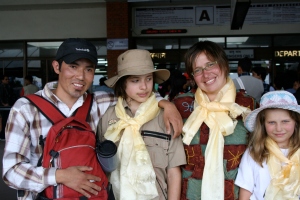